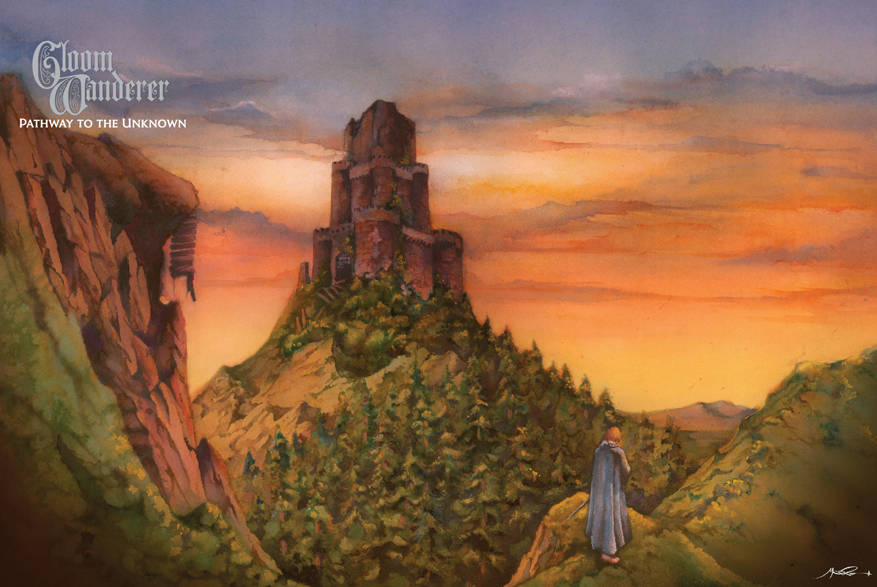 Prelude to Gloom Wanderer ‘Pathway to the Unknown’

One morning, late February 2020. I’ve got a message from Sayiba Von Mencekam. He told me that he made a solo project, named Gloom Wanderer. The music, just like the name, was so gloomy, instrumental, without vocals. A  solitude journey. He asking me for the first time about the illustration for this project. I said to Mencekam, what if i take a  listen to feel the material demo first and promising to call him later. And our conversation end up just like that. It succeed to make my Monday more abstract as a normal day. Gloomy.

April 21th, it was supposed to be a celebration of Records Store Day, but because the lockdown and social distancing issues, the celebration was cancelled. From the social media timeline, i saw Mencekam post released the Gloom Wanderer’s demo on Soundcloud while i was still focused on my partner recovery, who diagnosed Cancer last March 2020. Okay, i thought Mencekam cancelled the project, because our lack of communication. It beyond my  ability at that time.
And the previous artwork Mencekam used is a masterpiece from Thomas Cole, was one of the greatest landscape painters in the early XIX century. 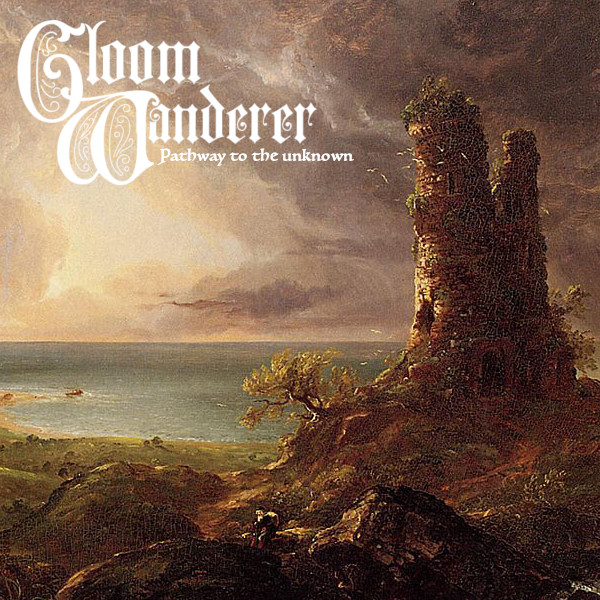 Like me, Mencekam adores his work like crazy. He put  Thomas Cole “Romantic Landscape with Ruined Tower”  for visual artwork, but for one reason or another, the cover was take it down by copyright issue. I’m not really sure. Here then Mencekam  called and asking me again to make an illlustration for the cover art.

The main concept and expectation are clear now. I thought the visual will not be far from a Thomas Cole  painting.  A chance like these is more likes continuing my inner interest about classic kitcsh painting, literature and self taught study which i have never gotten in any form of formal education. But i keep in mind and Mencekam, I told him that achieving the results as Thomas Cole achieved it is more useless task because it almost imposible. May other people might achieved close enough, but for me, it’s always imposible to make the painting too similar. I think it’s okay to copy the works of style other paintings. I’m not denied that I was influenced and learn a lot from them. I remember first i get more deep into watercolor, I learned from old and new other master of watercolor or oil painting. But, there are many things that I cannot immitate. Such as the materials. It’s has nothing to do with the material that other painter used. I know, if I used sephia that Cole used, I won’t be painting like the Great Thomas Cole. True! I know it sounds obvious. Haha, I’d just want to tell you this, and that would be it.

So that was a long term for me to take some sight for the project painting. 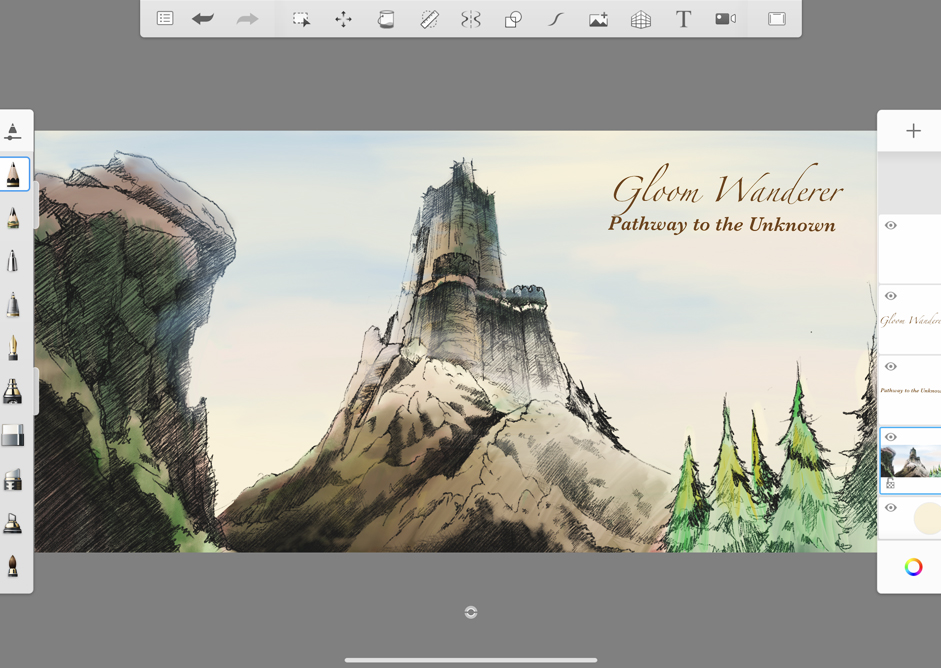 I remember first rough sketch i did used Sketchbook on ipad when were on hospital. And covid-19 issue was still trending full of shit and gimmick. The times of falls for us. When i asked Mencekam about the preliminary, he’d just response, “is it paman!” He likes it. But I still didn’t get a satisfaction until I found ‘something I’m on’ in this painting. I’m still need identifying what makes or why I’m so curios about the painting. A things like more spirit and beliefs. And some grieving era for my partner passed away, it was took long awaited until I got recall from my old sketch books for the addition image. Comes from my memory, when I took the card in October 2018. Here, the Five of cups. 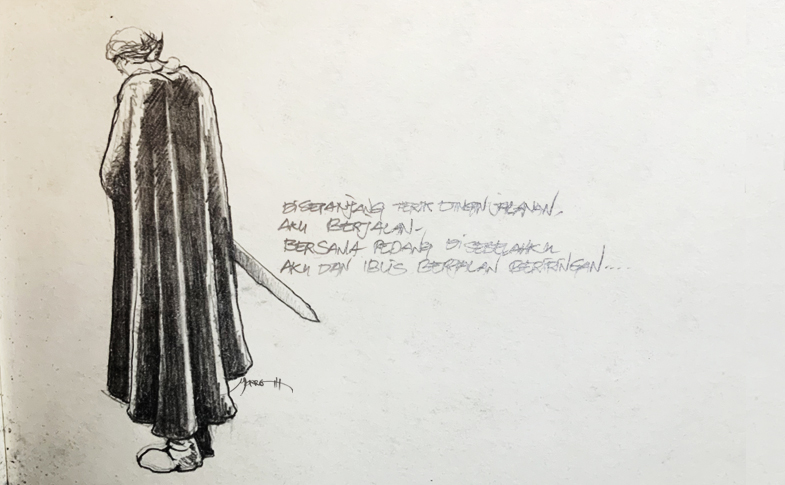 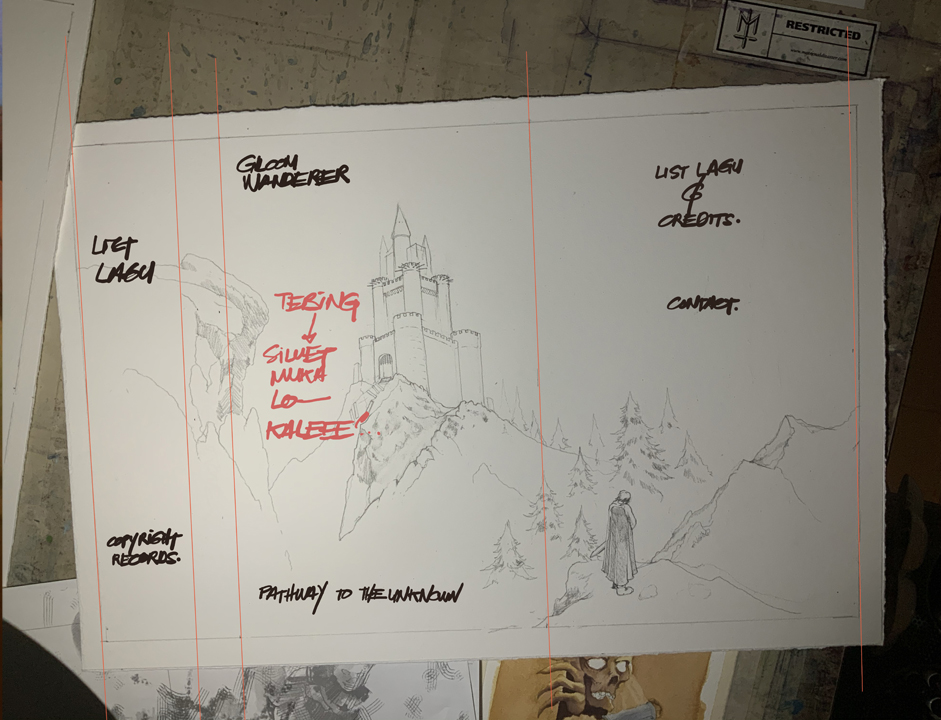 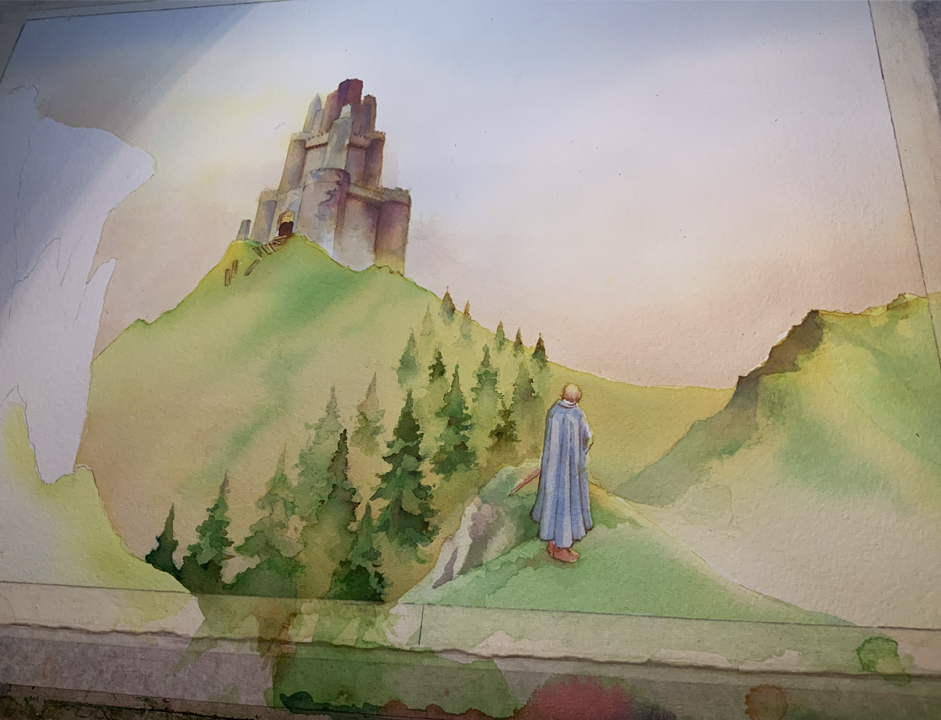 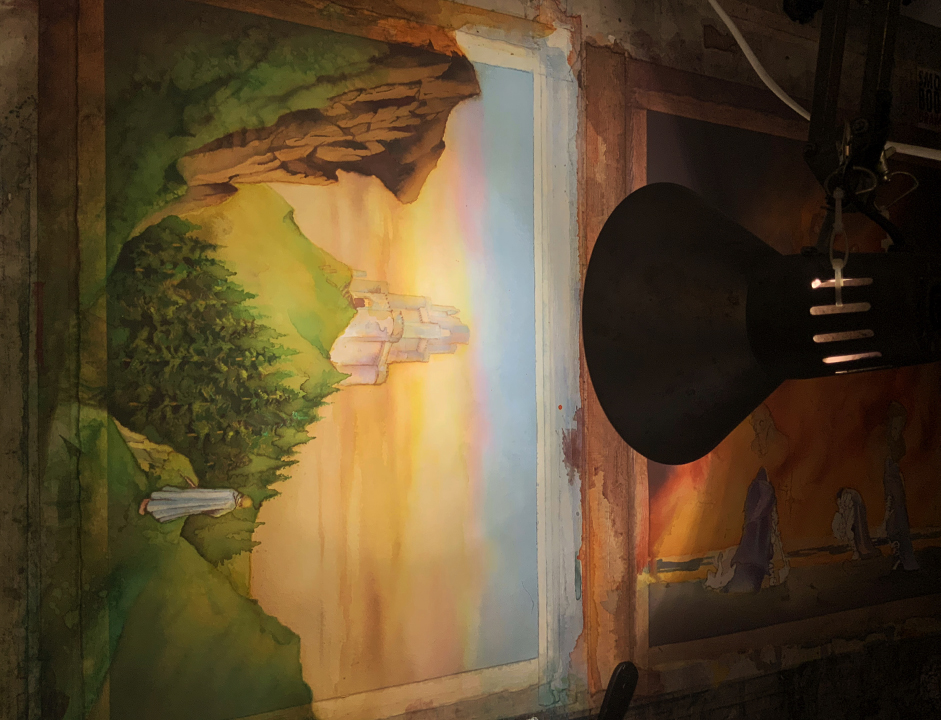 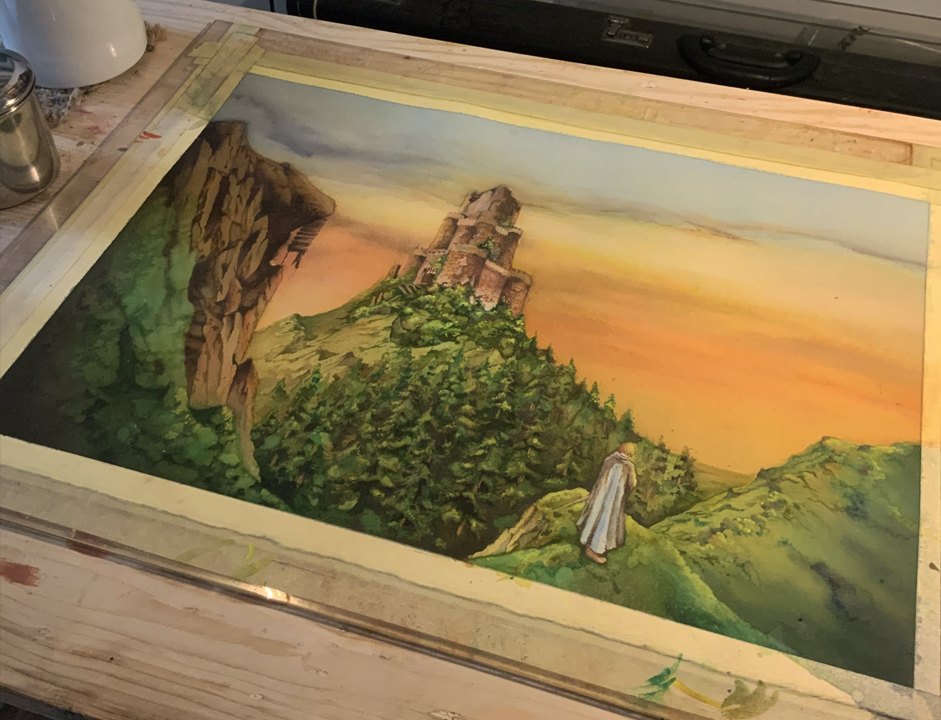 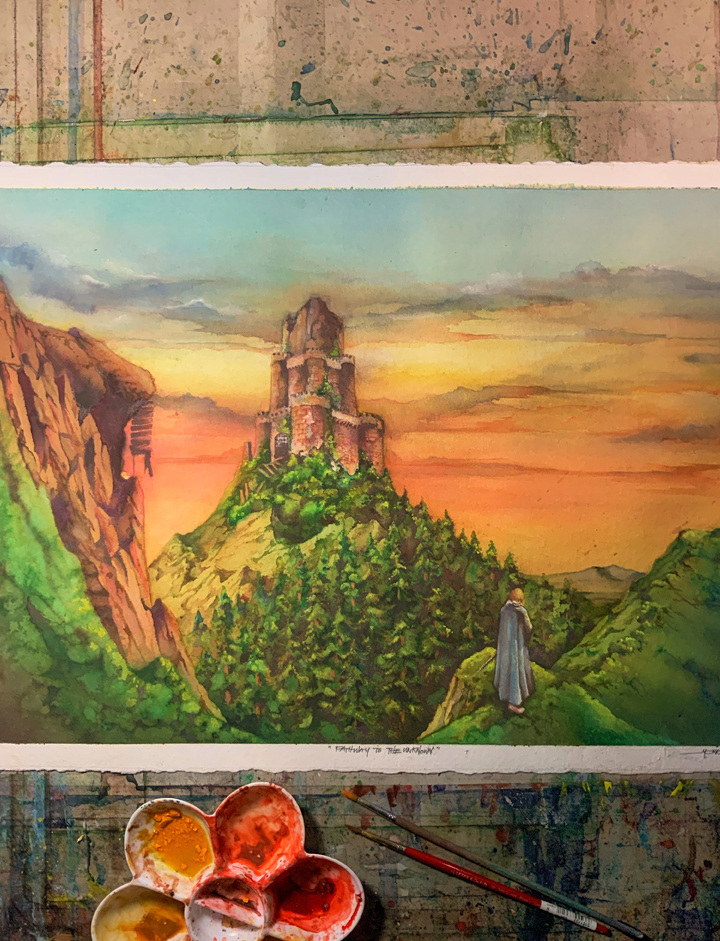 The story has spoken as fate telling of today. And yes, i’ve got some cups here. Some of them are broken. It’s okay. I still have other ones. I’m good with a damaged, I collect it. And about the bridge. I never want to burn over that bridge. Let says, okay the bridge are broken too, i will pass the river then. As easy as ‘when you cut me, I bleed.’ There are times I find myself to the pathway of  to the unkwnown, where’s the unknown maybe is a source of fear of many. But for those with a sense of adventure, it must be a challenge to be conquered. Right? What would you do to choose? No. zip your mouth and let the answers is keeps on you.

Pathway to the unknown. We’re about just where to begin, playing for the Time.