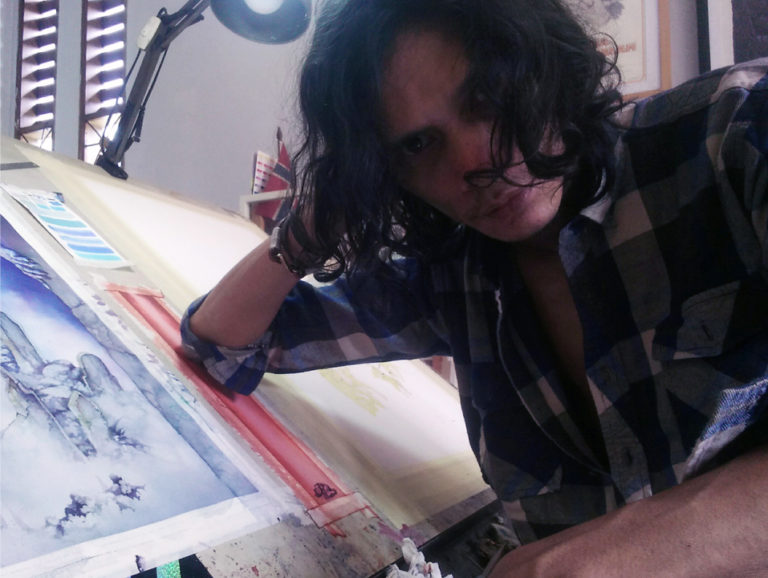 Morrg, a Grindrocker who’s self taught artist from Pekanbaru. Spending almost 18 years in Bandung,  he’s attended the study at Journalistic Unikom, Bandung 2002 – 2009 was didn’t stop his interest in art, illustration and music to be seriously pursued. In the beginning of his early career, Morrg started to making tshirt graphics for friend’s band and as a layouter/graphic at Ripple Magazine, one of local youth culture magazine, based in Bandung around 2006 – 2008. A demon lover, dark images, solitude and scenery,  narrative visual drama, and bit of cartoonish are the characters of each of his paintings. In partly works, he likes to combined present issue meet the world’s history, mithology, and ancient things becoming a new frame of kitsch of today in the future as an identification his works which mostly use ink and watercolor on paper.

He’s more deeper into art printing/ postergrafia, and with Rekti Yoewono (The SIGIT) making a collective studio called Månstråle (Pronounced “mon-stro-la“)  who makes and share his works on silkscreen printing poster for band illustration and gigs poster in 2011 until it falls. But anothers one is spring up. Morrg with his friendmate, Alexander Benedict (Muntah, Distorsi Mulut Setan) aka Mayatschism, make some sinergy spirit on Quest For Money, a duo agent illustrator based on live drawing for people on event or party.

As a musician, Morrg founding and writing music on his band Rajasinga who play Grindcore, formed in Bandung 2004. Morrg play Bass during Killed By Rajasinga EP & Pandora era. Then fill the position Vocal + Bass in NeverGrind EP, Rajagnaruk, III, Meribut (Compilation). The Band still active to making show and tour, writing music with Revan Bramadika on drum, Bimantoro Amirisyano on guitar. Their manage a self production called Negrijuana. In addition, Morrg’s next step experiment has making storyboard, animated and directed by himself for Rajasinga, Stoned Magrib MV (Negrijuana, 2016), and Suara MV (Blackandje Records, 2019).

This is a demo store for testing purposes — no orders shall be fulfilled. Dismiss